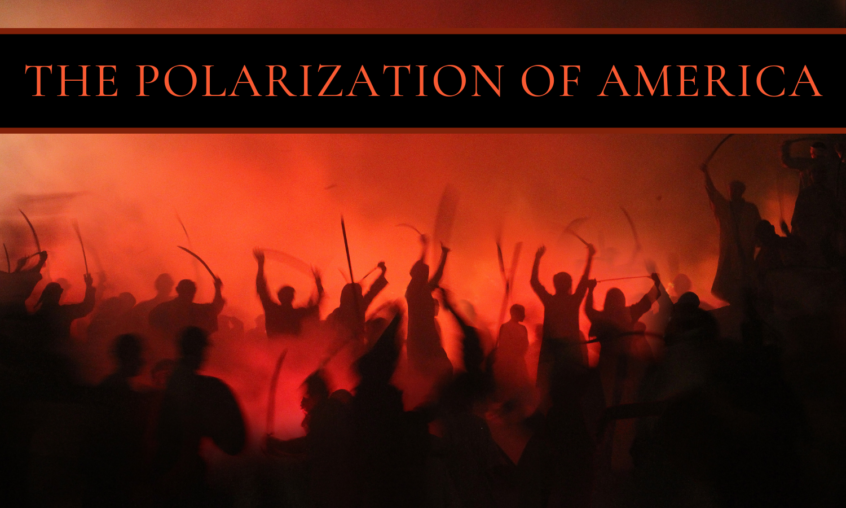 Polarization is the latest buzz word; it seems. The word originated in the scientific realm and was predominantly used for wave oscillations. Much like sound waves on a guitar string, the action of plucking the string creates a reaction that streams to both ends simultaneously, causing symmetrical vibrations which then turns into sound.

It’s an oversimplification, I know, but the process is so symbolic of our political climate, whoever came up with the term political polarization was a freaking genius.

If we use the video above as an analogy, the fingers plucking the strings are the hot button issues. The right side of the string is one political affiliation, the left, the other. When an issue sound, both parties stream to their side until they hit either the headstock or the bridge.

Congress has worked this way for years, waiting for an issue to strike and immediately streaming to their side of the string. But what they never seem to understand is the string must continue vibrating, even in glorious dissonance, to work correctly.

The image is fitting, isn’t it?

And while our congressional leaders were willing to smother the vibrations of democracy, the American people weren’t.  That is, until recently. This instrument, our democracy, the resounding music of freedom and prosperity, has been stifled with arrogance, ignorance, and hatred.

Why is that? Why now? Why can’t we seem to remember we are all on the same freaking string?

I started doing a bit of research on the subject and ran across this explanation. Most of you know I’m a true believer in exploring the dark annals of history. Not only it is fascinating writing fodder, but I happen to believe that we are creatures of habit. If we made the mistake once, and we didn’t learn from it, we certainly can do it again.

“Our time most closely resembles the period after the late 15th century … nothing has happened like the impact of the personal computer and the internet since the advent of the printing press … We live in a time of massive technological disruption of the public sphere. And most of us underestimate it, especially those of us who cling to old ways of getting information.”

Naill goes on to parallel the reformation period with that of today’s society.

I’ll be honest–that scared me a little.

Martin Luther believed the printing press would fulfill the church’s promise to bring the masses to Christ. And while it did bring about significant changes in religion, no one even came close to predicting the upheaval having printing capabilities would bring.

Mass propaganda was used to divide religious sects. Pamphlets meant to insight anger, and violence seeped into the mainstream. Downright heretical books were printed, which sent many on literal witch hunts. There was now a way for informational and revolutionary ideas to be heard throughout the land. And because the middle class had access to written words, the stranglehold of ignorance the upper class had held for centuries was forcibly loosened. Secular books in science became popular, transitioning the world which, of course, spawned an unholy reaction from the church. And the fact that religious monks were no longer solely responsible for book copying made it impossible for the church to control what was being shared.

All of this eventually led to societies across the globe being pulled apart from their fragile seams.

There is still time to veer from the destructive path polarization is leading us down. But to do that, we must allow the issues to resonate within us, to to affect us. And we must listen to those that are affected too, not with the superior arrogance of wanting to be”right,” but with humility and compassion needed to understand. We must keep listening until the sounds wane, wash away, meld into the sweet silence of understanding.

And then we must move onto the next chord–together.

2 Comments on “The Polarization of America”