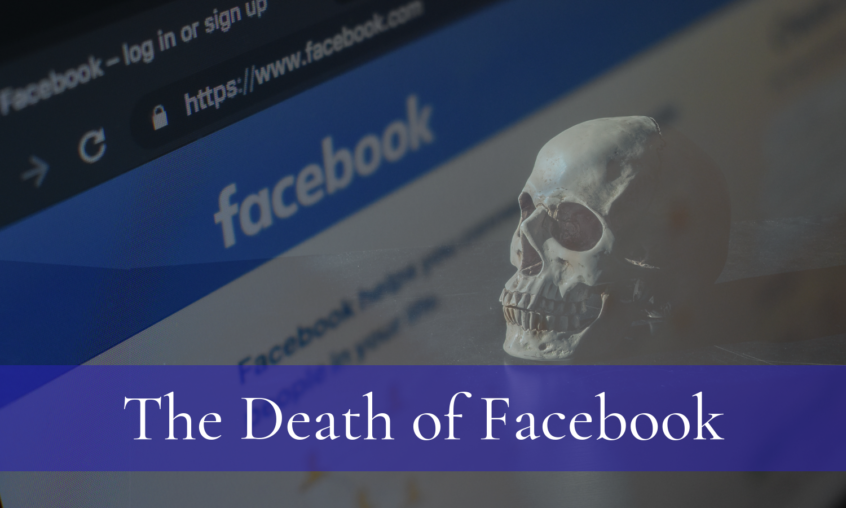 I know the title seems dramatic, but I’m feeling demonstrative today so stick with me.

It was ten years ago this summer that I stepped outside of my comfort zone and published my first novel. This led to a marketing baptism-by-fire. I did all the things new authors were supposed to do. I started a blog, which led to the creation of a website, I joined Goodreads, and I jumped into social media feet first.

The learning curve was vast and steep, but in those days, the time and sweat equity were well worth it because people actually saw what you posted.

And then came the algorithms, the scaling back of the organic reach, the pay-to-play boosts meant to nickel and dime the little guy.

Am I bitter? Just a little. I spent a lot of time building that audience. It’s not that I blame Facebook for wanting to get paid for advertising. If I’d built a hella site that had millions of businesses using it to connect with people I’d want my thumb in that pie too. But readers that have liked a page or joined a group expect to see it in their feed. And that’s the sticking point for me–hiding posts from the average joe feels manipulative. And wrong. Readers should get to view the content they’ve chosen to see. After all, they’re already swimming through ads they didn’t ask for. Surely, coming home from work and sifting through paid ads to find posts you want to see isn’t too much to ask, is it?

And according to Socialvert, it’s only going to get worse.

This article linked above is well worth the time, but here are my takeaways.

Aaaaand, this is why I’m frustrated.

I am an army of one, and I only have twenty-four hours in a day. I choose to spend those hours writing, carving out time for the fam, running this blog and upkeep on the website, sifting through literally hundreds of emails, and maintaining the day job so I can continue doing all of the above. Any time I have left, I spend reading and trying to improve on self-care. I think I’ve turned on the television twice this year. I don’t have the time, love, luck, nor money to test, restest, recreate, and tweak Facebook ads, hoping to bring in new readers. Nor do I have the patience to spend an hour on a post and only have two people see it.

I’ve discovered my most significant investment in this crazy publishing adventure isn’t money–it’s time. And Facebook has been getting a ridiculous amount of it–with little to show for my investment. This past week I documented the time I spent on Facebook, scrolling through things to share, creating graphics to post, commenting, and interacting with others. The total time wasted was shameful, honestly, when compared to the few that actually saw the fruits of my labor come through their feed. And the engagement of those people–it wasn’t just dismal. It was a freaking joke.

I’ve had friends suggest hiring an assistant, but that won’t solve anything–unless I hire someone with a direct line to Facebook’s Algorithm God. Something has GOTSTA change. And it’s obvious Facebook could give a flying fig, so the change has to come from me.

I’ll still be posting weekly in The Isaacs Society, but I’m scaling way back on both my personal and the author page, and I’m playing with the idea of putting the Society videos on here instead. We’ll see.

Until then, we can meet up on Instagram, LinkedIn, Twitter, Goodreads, Bookbub, and, as always, here. And if you like the Amazon page, you’ll get the latest on new releases such as The Scythian Legacy Pre-sale (in 2020, so it won’t be for a while) and Edna’s novella, One Perfect Day, which should be out sometime this fall.

We may not get to interact in the same way we used to on Facebook, but at least with the newsletter, Amazon, and Bookbub, you get what you sign up for instead of some inordinate math program determining whether you see it or not.

After ten years, it’s disheartening to see what Facebook has become. But there’s no use in tilting at windmills. It is what it is. Now, the only thing left to do is figure out how best to move forward. And so, I’d love to know. Other than Facebook, what is your favorite way to interact with the authors that you love?