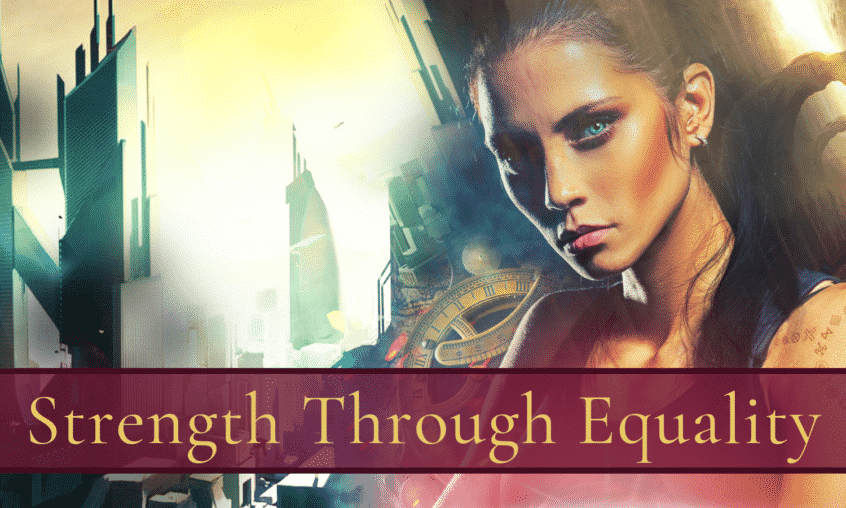 I’m compiling answers and insights to add to the Scythian F.A.Q. page, which will be featured on the site in the coming months.  But one question keeps popping up, and so I thought I’d give it a post of its very own. 🙂

Why is the Scythian Credo Strength Through Equality?

In order for me to explain, we need to go back to the beginning.

Several years ago, I went on a historical romance binge-read that was so epic it made me consider creating a steamy bodice-ripper of my own. Within writing the first 20,000 words I set it down.

At first, I had no clue. I loved the premise of the story, but writing sessions were fraught with frustration, especially when creating interactions between the protagonist and her male lead. I’ve read this genre for too many years to count. I love the romantic feel of that time period, the descriptive prose. I love the language, the traditions, the polite manner in which historical romance characters speak.

Why, then, did writing a historical piece make me want to scream?

It wasn’t until I ran across an article by the incredible Chuck Wendig, entitled “How Strong Female Characters Still End Up Weak and Powerless” that I finally figured it out. If you have time to read it, click on the title. It’s a good one. What struck me most was Wendig’s take on agency.

I realized I’d been used to writing action-driven fantasy, any romantic relationships found were steeped in a world I created. My historical romance was character-driven in a culture where the protagonist had been shackled by social constraints. In her world, she had little recourse other than to react to a man’s decision instead of grabbing the bull by the proverbial horns and taking charge.

That led me down the rabbit hole of researching cultures, starting with the early Greeks. What I discovered was a constant, disturbing trend of civilizations that valued men way more than women. In Western cultures, beauty centered around dainty features and innocence, which was somehow personified by having a small waist. Women in East Asian cultures didn’t fare much better as a young girl’s value was based on the size of her feet. The painful and often debilitating practice of foot binding started as young as the age of three or four. The smaller the girl’s shoe size, the better the chances a wealthy man would choose her for a wife. And don’t even get me started on the genital mutilation that still takes place in Africa, the Middle East, and Asia.

I’ll quit rambling, but my point is that for millennia civilizations have kept male-dominated societies where a woman’s value was determined by how desirable the patriarchy deemed her to be.  I began to speculate how generations of oppression had altered women’s natural progression. That then sparked the question:

What if women would have been treated as equals from the beginning? How would our society be different today?

The subject turned into a Gordian knot in my brain, and I was wrestling with my thoughts when an article about a newly discovered Amazonian burial mound came through my Facebook feed.

Which brought me back to old Chuck’s article. I began to wonder if I could create a romance where both male and female characters held equal agency. I didn’t want to develop a matriarchal society where women ruled, nor was the purpose of this story to denigrate the importance of men. I wanted to develop a culture where male characters still had masculine traits, and females were still feminine, but those distinctions would not be the determining factor of their worth within their world.

Thus the Society was born.